Why Writing 'Vortex,' a Time-Traveling Whodunit, Was a Puzzle 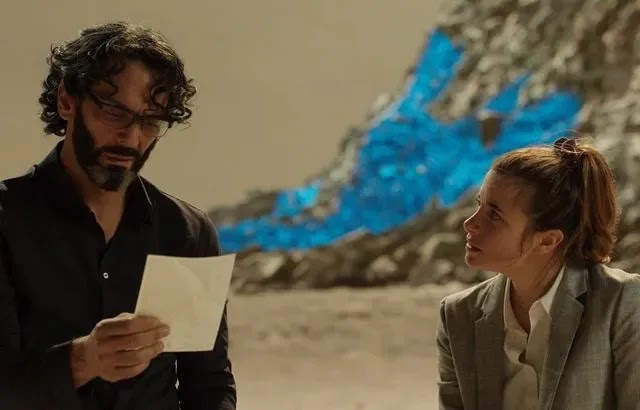 One theory claims that if we could go back in time and change some details of our life, everything that comes out of it would change. This is called the “butterfly effect”.

Vortex , a Franco-Belgian mini-series in six episodes, broadcast this Monday at 9:10 p.m. on France 2 , skilfully plays with this theory and the codes of time travel films and their desired or undesirable effects. The set mixes thriller, fantasy and romance. A mixture of genres which is not an easy recipe to film. Explanations.

In Vortex , Tomer Sisley plays Ludovic. Captain of the judicial police in Brest, he is investigating, in 2025, a murder that occurred on a beach. He shares his life with Parvana (Zineb Triki), their son and the daughter he had with his first wife, Mélanie (Camille Claris), who died in 1998 in an accident. While reconstructing a crime scene using a virtual reality tool, a bug suddenly opens a time rift.

The policeman thus comes face to face with Mélanie… ten days before she dies in the same place. The couple understands that the two cases, which occurred twenty-seven years apart, are linked. Their objective is then to do everything to prevent Melanie's death. But you also have to be careful that the changes in the past don't change Ludovic's present too much. For example, he must not lose his second wife and his son. The captain of the judicial police, stuck in the Vortex, will thus be confronted with many dilemmas.

The Vortex series was imagined by the writer Franck Thilliez. It was written by Camille Couasse and Sarah Farkas, in collaboration with Marine Lachenaud, Guillaume Cochard and Louis Aubert. “Originally, Franck Thilliez had developed a concept of ten pages for France Télévisions and Quad Drama”, says Camille Couasse, whom 20 Minutes met at the La Rochelle TV Fiction Festival . The project remained in the drawers for a few years.

“Iris Bucher and Roman Turlure asked us to take over the project. Franck Thilliez had written the story of two cops who did not know each other and solved cases in two different temporalities using an old computer from the 1990s. We added the love story and virtual reality” , continues the screenwriter.

“We met police officers reconstructing a crime scene in a book fair. One of them told us that the future was drones that filmed and could soon be able to immerse themselves in a 3D crime scene,” explains Sarah Farkas. "We also wanted to tell an impossible mourning and an impossible love story", continues Camille Couasse.

The screenwriters chose to explore the possibilities offered by the “butterfly effect” as illustrated by films such as Back to the Future , The Butterfly Effect and Minority Report . "A character who can't come to terms with the death of a character he loved, even if it's been twenty-seven years, it's a very strong raw material", notes Camille Claris, who plays Mélanie .

“We made a storyline per character”

This exercise was a writing puzzle. “We did one storyline per character. A, B, C according to the different temporalities with different colors, we tried to follow like that, ”recalls Sarah Farkas. “It was a bit creepy. When we changed something, we asked ourselves: “can we move it?” We spent our time trying, to see if it worked or not,” recalls Camille Couasse. "There was also this dilemma between not having temporal paradoxes but still creating emotion," adds Sarah Farkas.

Filming a story that is supposed to take place over several temporalities is also not easy. “Normally, on a scenario, it is noted for example “exterior day, the sequence number and the decoration”, there, we had for the decoration “maison Ludovic T1, T2 or T3” for the different temporalities. It was a real headache for the script, the set and the first assistant,” says director Slimane-Baptiste Berhoun.

“I played with two Ludovics, a Tomer”

Another challenge, to stage the sequences where Ludovic is on a beach in virtual reality within the police station, while Camille is on a real beach a quarter of a century earlier. “He is indoors, she is on the sand. There is an element on which we never wanted to compromise: she has wind in her hair, not him. Once we have set that. How do we do that ? Some sequences were shot on a beach. As soon as there is Tomer, we are necessarily in the studio. But, the important point is Tomer's hair! “, explains the director.

“A pipe was blowing the wind on me in the studio. It has become so important that we have personalized it by drawing eyes for it,” laughs Camille Claris. And to add about Tomer Sisley who plays Ludovic 25 years apart: “I played with two Ludovics, one Tomer, but I really had the impression that there were two actors! »

No green background in the studio, the production relied on the same technique as for The Mandalorian series . The beach setting was broadcast on a circular wall of LED screens, allowing the actors and the viewer to be completely immersed in the plot. A first in France!

Quickly getting the viewer to understand what era they are in is no small feat either. “The cup thing, which we see at the beginning and which changes in episode 2, to make it understood, you really have to focus on it. This reveals how complicated it is to make people understand temporal paradoxes. And here, we're just talking about a cup that reveals that the guy has changed family, life, etc. When, later, it comes to things much bigger than a cup, you have to be a little didactic, ”says Slimane-Baptiste Berhoun. Result ? A futuristic drama that goes off the beaten track.